I became interested in goats about a year ago. I watched a bunch of YouTube videos on them and Oakley loved them at the fair. She hadn’t been walking long and we must had gone in the petting zoo at the fair 10 times. We’d leave for a minute and she would walk right back over to the gate, wanting to play with the baby goats.

Andrew prefers cattle as they make more money and he knows a lot more about them, so I knew it would take some convincing. He didn’t want the goats in the same pastures as the cows because he didn’t want them getting out and it would mean we wouldn’t be able to have as many cows.

One day, I had a great idea. Goats eat brush, leaves, and a bunch of stuff that cows won’t touch. On one side of our property, we have a pretty big, wooded area that we weren’t going to use. I told Andrew that would be the perfect place to keep goats AND they would clean up between the trees. Andrew became fully on board with goats after we figured out where to keep them and that they wouldn’t limit our cattle herd. Speaking of that, our herd is most likely growing but I’ll save that for another post.

We started researching different types of goat breeds and narrowed it down to Nigerian Dwarf Goats and Nubians. We knew we didn’t want a meat breed like Kiko or Boer and if we were going to use our goats for anything other than breeding, we would milk them. After quite a bit of research, we learned that most people think Nigerian Dwarf’s milk tastes the closest to cow’s milk. Milking a goat will be a long ways off, but it’s something I would like to try if I have the time. 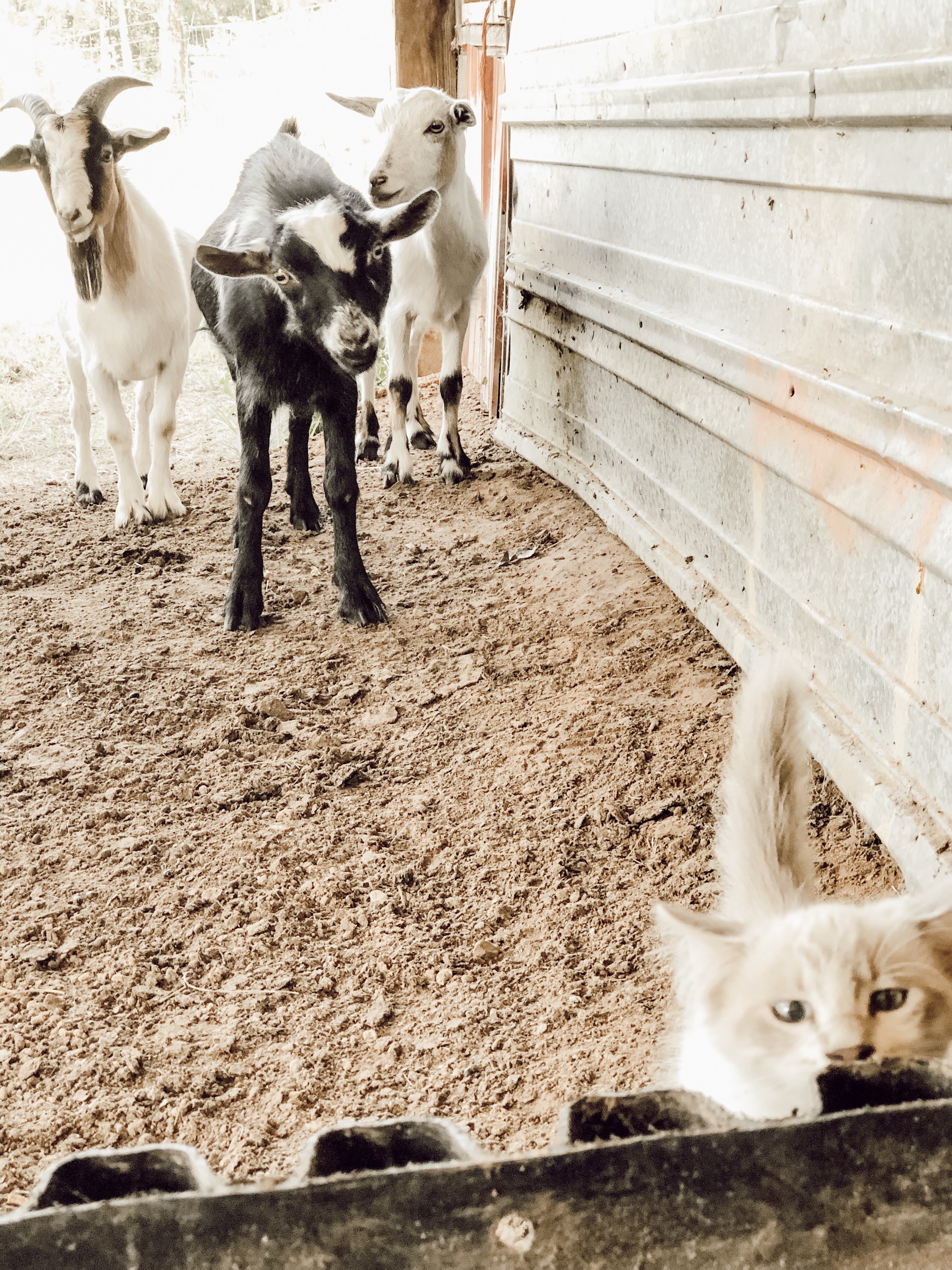 We’ve read that Nubians are great dairy goats as well and I love their floppy ears but it seems like a majority of people prefer Nigerian Dwarf’s taste of milk over Nubians. Nubians are also a larger goat and with Oakley being so little, we thought the smaller the better. I would definitely be open to getting some Nubians in the future though. 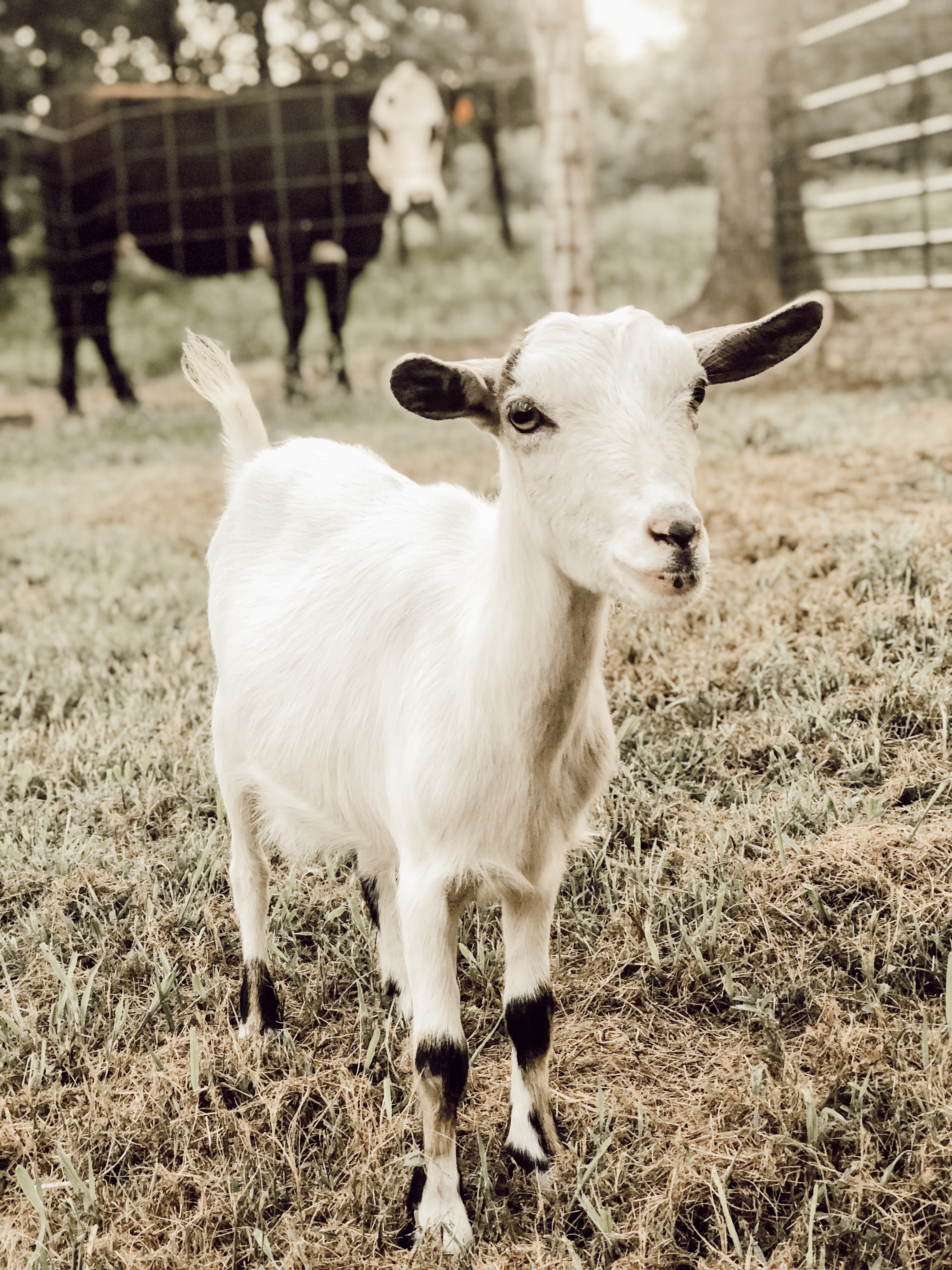 Right now our plan is to possibly get rid of two bucks and get another doe or two. We would like to breed our does and maybe milk them one day in the future. Now that you’ve read about why we chose Nigerian Dwarf Goats, let me introduce you to the newest members of our farm!

The buck with the black beard is Casey and the buck with the white beard is Jim. The polled white one with the cute, little underbite is Clover and the polled black and white one is John aka the escape artist. Look at him in the pasture with Pete! He’s the same one that jumped out of the back of Andrew’s truck. Our friends actually gave us our goats as their herd was a little bigger than they wanted. You can read more about that and how we got them home with a little redneck ingenuity here. They came with their names and they’re warming up to us pretty quickly! Oakley is in love! She loves to run around with them, give them hugs, and give them kisses!

Previous Post: « We got goats and you won’t believe how we got them home!
Next Post: You Have Goat to be Kidding Me »