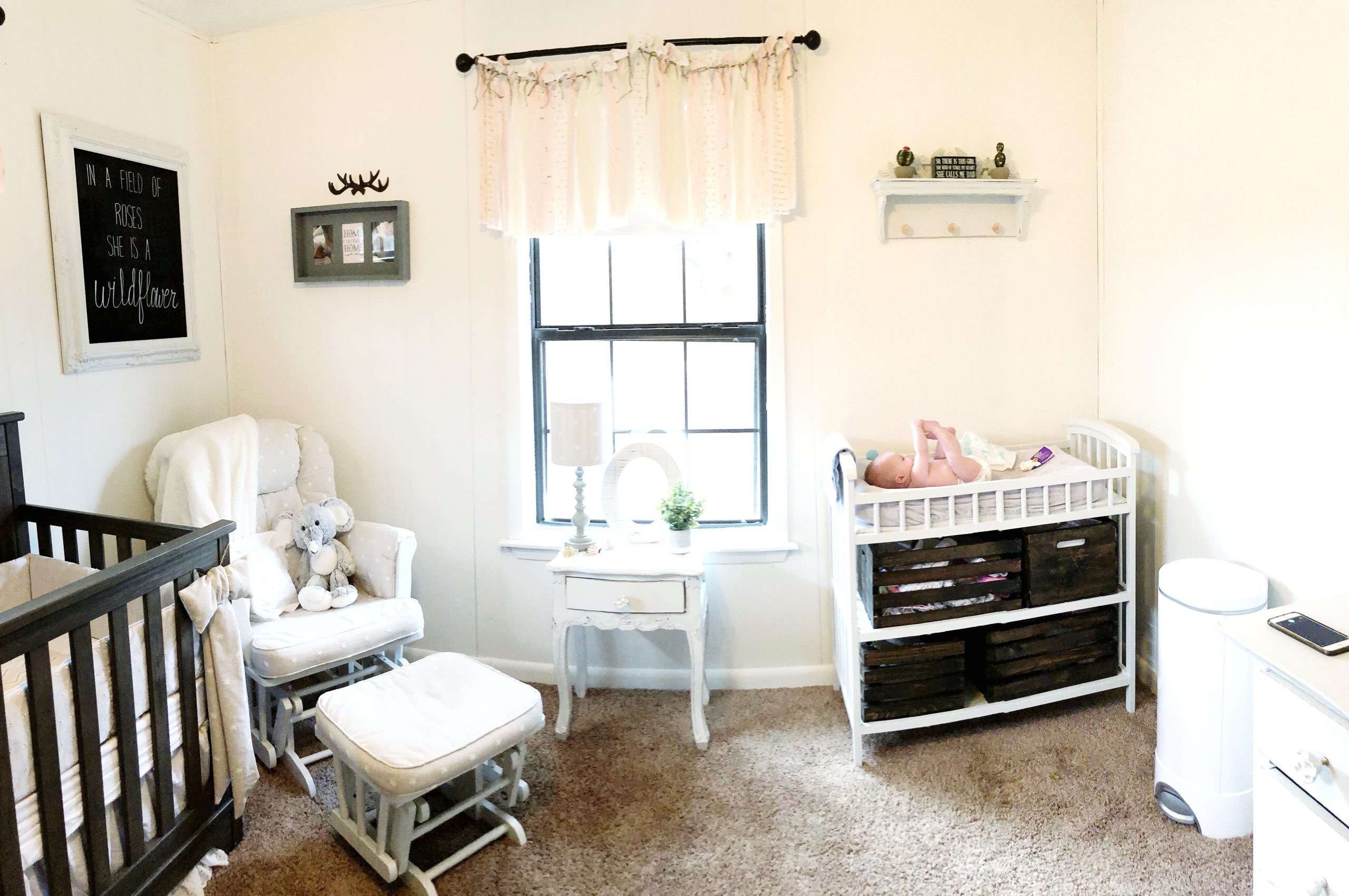 Oakley’s nursery is really special to me, which is exactly how I wanted it to be.  Her grandma’s and their very best friend’s pretty much made or bought everything.  This means a lot to me because we live so far from all of our family and it was one way for them to be a part of her life.  Facetime helps too!  My mom found most of the furniture and painted it, which gives her nursery a lot of character.  My mother in law bought a lot of the decorations and the crib, while her best friend, Jaena, painted a few wooden signs that hang in her room.  They were also used as decorations at the baby shower! All of the walls are painted white while all of the furniture is painted a white with a light grey tint to it.

The moment we found out we were having a girl, I knew that I didn’t want a lot of pink whether that meant in her room or on her clothes.  I love really light pink and that’s about it, but I’ve found having a little girl makes you like pink even more haha. I think it’s safe to say it’s grown on me.   I told my mom that I wanted a nursery that was mostly neutral colors.  It has a little more blush, pale pink than I had planned but I wouldn’t change a thing. I love everything about it and I love to spend time in there with Oakley.

My mother in law made a fabric banner for the baby shower.  We decided to make curtains out of it for the windows!  You can’t see them in this picture, but around the lamp are three tiny porcelain boxes.  They are shaped like cakes that look like teapots.  Those were Carly’s, Andrew’s sister!

The week before Oakley was born, my mom and dad packed the entire nursery into their car and drove from California to Arkansas.  Their best friends Lisa and Roger met them out here a week later.  My mom and Lisa spent most of the time putting her nursery together.  My dad and Roger helped to hang some things too.  Oakley’s nursery was a group effort, which is why it’s so special to me.

My mom bought the glider and had it reupholstered in a light grey fabric with little white flower/ star details, which makes it one of a kind!  The chalkboard is an old frame she painted and then she used chalkboard paint. I wrote, “In a field of roses she is a wildflower,” a saying I knew I wanted somewhere in her room before she was even born.  I used a chalk marker, which I prefer over regular chalk.  Her Memaw and Papa bought her adorable crib from Target!  It’s the Simmons Kids Slumbertime Monterey 4-in-1 Convertible Crib in Rustic Grey.  It converts to a toddler bed, daybed, and full-sized bed.  The Oakley Lane sign is one of the signs Jaena made. After we found out Oakley was a girl, we went to Hobby Lobby and picked out this picture.  It was the first thing we bought for her nursery!  The arrow is from Hobby Lobby too! The cute wooden sheep was made by my old neighbor in California.  He is the sweetest elderly man and I’ve known him since I was 5.  Is this dresser not the most perfect farmhouse dresser?! My mom bought it, painted it, and changed the knobs.  The knobs are from Hobby Lobby, too!  The dresser has wheels on the bottom and what looks like slats on the side.  I think it looks like it came straight out of an old farmhouse. I wish I had one for every bedroom in our house. Here is a shelf that my mom painted.  I may have to do a blog post about the techniques she uses to paint furniture because she does an awesome job.  How cute are those Beatrix Potter books on the shelf?  The little pearl purse hanging with the pink dress was mine from when I was little.