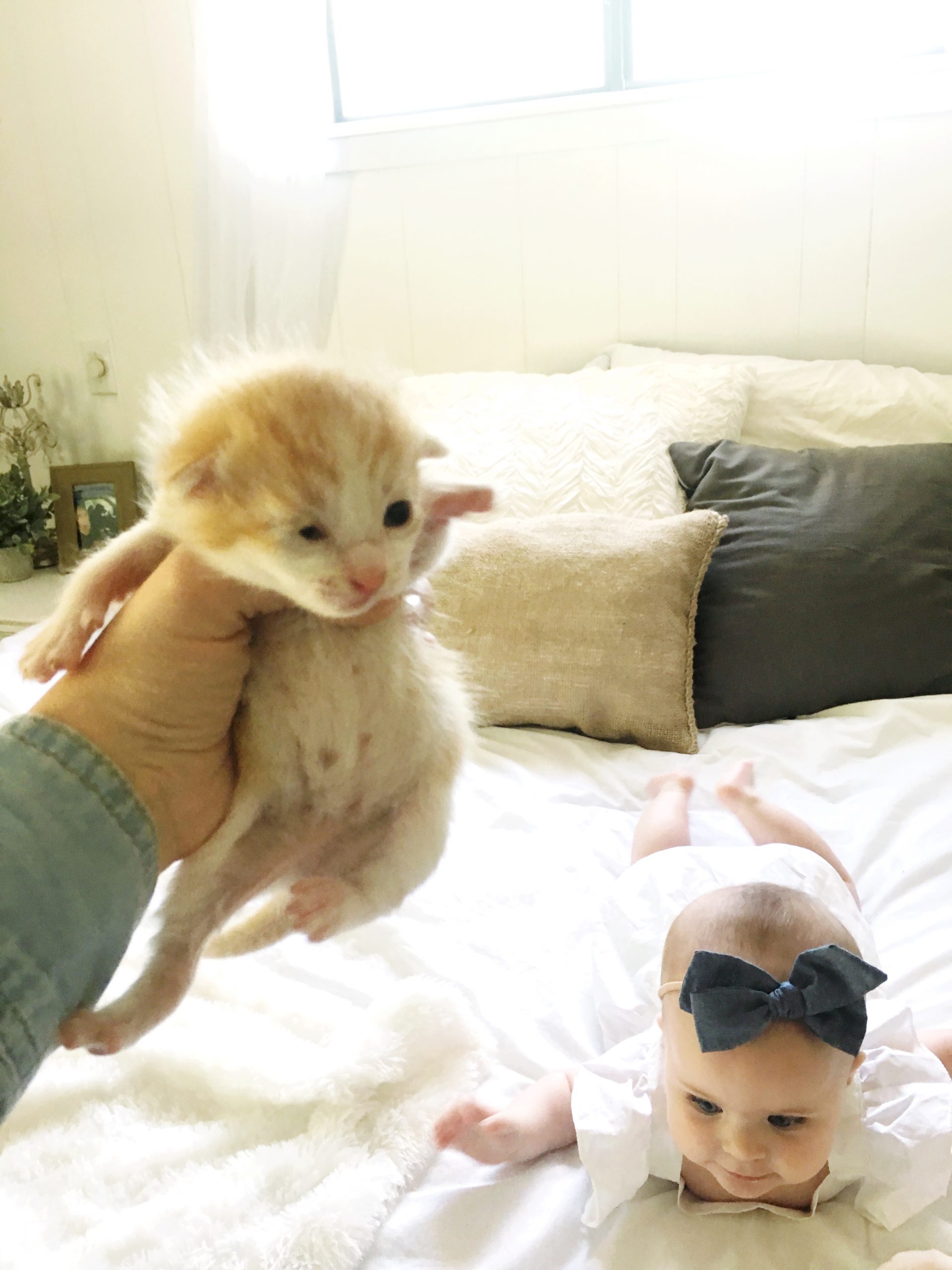 I thought I would jump on here and give you a quick update on our kittens (mostly pictures)!  They’re only little for a short time.  The kittens are almost two weeks old and they are cute as ever!  Oakley LOVES them, so yesterday I decided to bring them inside for a little bit.  They’re so tiny, I was able to carry Oakley and grab all four kittens out of the milk can. The whole time she was kicking her legs, making noises, and waving her arms everywhere.  It was actually a little scary since I was also carrying four kittens, but that’s typical Oakley fashion.  She was so excited and didn’t know what to think about their tiny meows. I laid them down on our bed and then sat Oakley next to them.  She immediately wanted to grab them. I kept moving her hand and saying, “gentle.”  She was a little rough with them haha.  She kept grabbing their tails.  Poor kittens, but she has to learn somehow.  Since she loved them but didn’t realize how fragile they were, I thought I would move her farther away (to buy them some time) and to also see if I could get her to crawl.  What little girl can’t be bribed with kittens, right?  She was the closest she’s ever been to crawling!  I seriously thought yesterday was going to be the day, but then she went back to scooting on her belly.  I think it’s a sign I need to sneak them into the house and let Oakley have a play date with the kittens again.

This is one of my favorite pictures of Oakley and the kittens! Going for their tails! How precious and perfect are they? Can you see her excitement? They bring her pure joy. I think it fits her personality to be raised on a farm.  Don’t you agree? Our farm got four new residents today! Our cat, Laura, had four kittens today! This was her third litter.  The first kittens she had were born on Easter a year ago.  We were leaving and as we pulled out of our driveway, Laura jumped out of the back of Andrew’s truck! We both panicked because we knew she was pregnant.  Andrew slammed on his brakes and got out of his truck.  Laura had already run back to the house but for some reason, Andrew looked in the bed of his truck and saw three tiny kittens!  There was an orange and white one, a dark grey and brown striped one, and a calico one.  The calico cat is now named Mia and is best friends with a chihuahua, the grey and brown one went to another friend of ours, and we kept the orange and white one and named him Garth.  He’s in a lot of the pictures I post.  What better day to find baby kittens than Easter?  They were precious and Garth has turned out to be an awesome cat.  I still get pictures and updates about Mia because she went to my coworker.  Here’s a picture of the three of them in an egg basket! Laura’s second litter was special as well because they were born the day before Oakley!  We actually thought that Oakley was going to be born on the same day as the kittens because I had contractions that day, but they stopped after I went for a 3 mile walk.  How backward is that? Anyway, back to the kittens.  Laura had three kittens in her second littler. One looked like our cat, Tink and was white with a raccoon tail.  One looked like our big fluffy cat, and the third looked like our cat, Barb.  Unfortunately, I don’t have happy endings for these three.  Two of them went missing and only the little white one was left.  It was so cute because you would just see little white specks bouncing in the bushes.  Then one night, Andrew had his friend over and they were working on something out by the barn.  My friend and I walked out there and she spotted the little white kitten.  It had gotten up in the wheel of Andrew’s side by side.  I wish I only had happy stories to share on here, but I guess that’s the reality of living on a farm.  It was sad and definitely the one part of living on a farm that I don’t enjoy.

Back to the good news!  This morning Andrew woke me up and told me Laura had her kittens.  I asked him where and he said in our milk crate.  We have an old milk crate that sits right next to our front door.  I used to keep cotton and wheat in there but the chickens pecked it all and destroyed it.  Our cat, Tink, used to sleep in there, so Andrew put a pillow and a blanket in there.  When I walked out there this morning, there she was, all cuddled up with her four kittens!  The past two litters she had three, but this time she had four.  She’s such a small cat that I can’t imagine her having more than four.  One is grey and white, one has grey and brown stripes, one is orange and white, and one is white with a striped tail.  I can’t say that they were born on Easter or the day before Oakley like her last two litters, but I can say they were born the day after the new royal baby.  That’s all I got, so we’re going to have to go with that.

Here’s Oakley on the porch swing with one of the newborn kittens, but she was more interested in Laura. Laura came running over to make sure her baby was okay. The lighting’s not the best but here are the four kittens in the milk crate. I’m sure you’re wondering what I’m going to do with all of them.  I already have three possible homes, so the goal is to find all of them homes but if we can’t, we’ll keep them.  All of our cats are outdoor cats.  They have boxes in the carport with blankets in them.  I’ll have to do a post about our cats in the future and give you an update on Laura’s new kittens!